St Joe – The Absurdity of the Leucadia Airport Comp

By Aaron Stackhouse on April 2, 2011 in Uncategorized

One of the most interesting investment stories to come out in the past year is the debate over The St. Joe Company. On the long side, and 30% stockholder, we have Bruce Berkowitz and his mutual fund, Fairholme Funds, Inc. In 2010, Morningstar named Mr. Berkowitz their Domestic-Stock Fund Manager of the Decade. And it’s no wonder why – since inception in  1999, his fund has achieved annualized returns of 14.47% compared to just 0.45% for the S&P 500.

On the short side we have David Einhorn’s Greenlight Capital. Mr. Einhorn is a highly respected manager who’s fund has returned annualized returns of 22% since inception in May 1996 (through 2009) compared to approximately 4% for the S&P 500.

Einhorn has been publicly short since 2007 and on 10/13/10 he made public an updated analysis of the company. His presentation, which can be found here on his website, centers on his thesis that much of the land is not worth what the company says it is.

The company owns approximately 574,000 acres of land, primarily in the Florida panhandle. The majority of this is undeveloped land managed as timberlands, but approximately 38,200 acres have entitlements for residential or commercial development.

St Joe owns 71,000 acres surrounding the new Northwest Florida Beaches International Airport in the West Bay Sector of Panama City Beach. 41,000 of these acres are dedicated to preservation in the sector plan, and the value of the remaining 30,000+ acres has been subject of much debate around this company.

So how much is this land worth?

Well, the airport relocated from its former location which was approximately 10 miles southeast in Panama City. In conjunction with the move, the airport authority sold the land at this previous location to Leucadia, who has plans to redevelop the site as a mixed-used project, for $80,000 per acre. Some bullish analysts have pointed to this 2007 sale as a comp for the value of St. Joe’s land surrounding the new airport site.

The argument is that if you apply all of St Joe’s enterprise value of ~$2.2B to this land around the airport, the market is valuing the land at $60,000 per acre and investors are getting the rest of the company “for free.” (The enterprise value has gone up a bit since Broyhill’s report, but this the basic argument.)

This argument seems to have gathered some momentum as David Einhorn noted in his presentation.

But at a closer look, this comp doesn’t even pass the smell test.

In fact, I’m pretty sure the only reason it was ever considered a comp at all is that both parcels are usually referenced in the same sentence as the word “airport.”

Let’s review… Leucadia purchased a FORMER airport, to be redeveloped as a residential site. The land consists of 708 acres situated along the water in Panama City. The demographics are dense – with 73,000 people in a 5 mile radius. It is one of the last available tracts of land of this type in Panama City, and notably, it is NOT next to an airport. What’s more, Leucadia purchased the property in 2007 near the top of the RE bubble. 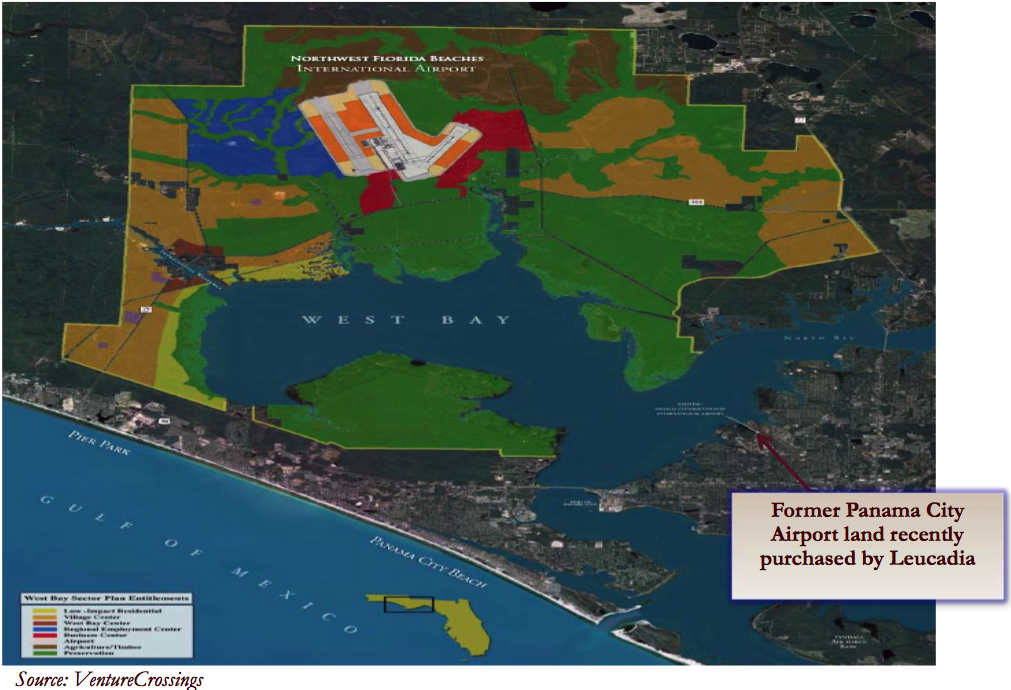 St Joe’s land on the other hand is next to a new airport (not the most attractive feature last time I checked). It has much lighter demos – only 427 people within a 5 mile radius – and almost none of the developable land is on the water. (The land shown in green above is dedicated to preservation – and the yellow waterfront land at the northwest corner of the bay is actually part of a separate St Joe development, River Camps on Crooked Creek, which is a nice development but carried elsewhere on the balance sheet). St Joe’s airport land needs to be evaluated at today’s levels and shouldn’t be appraised at 2007 peak values, and notably, this land will require significant capital investments in site work, roadways, utilities etc. 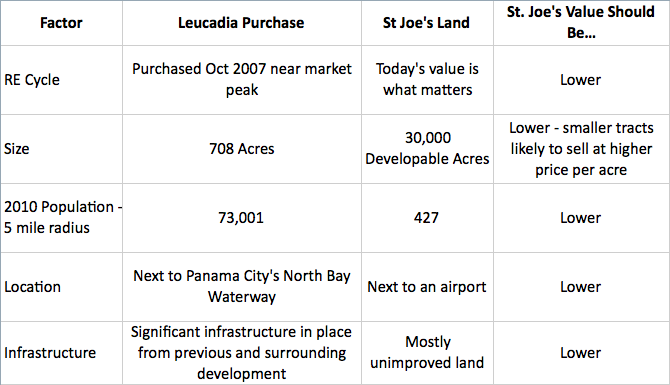 The problem with this comp is the Anchoring & Adjustment Heuristic. Once $80,000 per acre is suggested, there is a tendency to revise estimates relative to this anchor, regardless of whether $80,000 is a reasonable starting point. Once someone points to $80,000, $60,000 suddenly becomes “conservative.”

I’ll be back soon to discuss some more realistic estimates for what this land is worth (but first, forget the $80,000 figure) and other aspects of this exciting investment debate!

Author Disclosure: Author is considering a short investment at the time of writing and is likely to enter a short position in the next few days.

These NNWC Stocks Outperformed the S&P 500 by 20.8%, Annualized since 7/17/09
Accounting Irregularities at L&L Energy